Gators and Gunshots, or Foolishness Across America, Day Seven 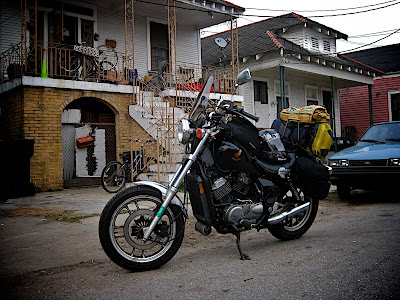 New Orleans. I could feel the city long before it crept into view. There emerged the flat vastness of the land below sea level and I could smell the humidity of the bayou in the air. The earth planed out in brown and green-blue. The highway became a long span of bridgework, like great vines grasping the city and holding it to its place on the edge of the ocean. I stopped on the roadside to watch it all for a few minutes before pulling into town. Tugboats and barges whistled from the waterways along the road, trailed by swarms of gulls.

I eased the bike into town. Milo lived in the Bywater neighborhood, somewhere southeast of city center. Every other house was abandoned, boarded sloppily and covered in spray paint. Small scooters weaved through the late day traffic. An old man on a decked out touring bike passed me while I waited to turn. The tags were from New Jersey, I'd been outdone, in distance at least. I consoled myself by noticing his fancier equipment, more comfortable bike, and the fact that I'd be pressing on to Arizona.

Milo's house was easy to find. A half dozen bicycles were strung about the front porch. I parked and laid on the stoop till I heard the door. She was due in for a shift at Mimi's Bar in an hour, but we caught up and did a tour of the house. I managed to squeeze the bike into the backyard, where I stripped it of luggage and chained it securely to the fence railing. Soon, a knock at the door. I was surprised to find Kel, NoDance, and Gunker from back home. I'd heard they too were traveling the States, but hadn't counted on such a well-timed rendezvous. I was excited for the company and decided to stay an extra night.

We walked to the French Quarter for some quick dinner and Turkish coffee. On Milo's recommendation, we stopped in for a performance at the Iron Rail Bookshop. We were again met with the strange coincidence of the highway-bound. Ry, Fitz, and One-feather were standing on the corner outside. I hadn't seen One-feather since he'd left for Washington years ago. He explained that he'd just arrived in New Orleans three days ago, eager to make a home. Fitz and Ry had left Philadelphia on bicycles in October and gotten stuck (happily) in old NOLA.

Our gang grew and we relocated to the French Quarter, where we drank tallboy beers on the street corner and swapped stories. Ry and Fitz knew half the kids in town and we had a stream of strange folks merging and moving through our circle. A brass band rang out from a bar a half block down. Red and blue neon poured from the storefronts, giving gleam to the horde that moved up and down Frenchman St. The night ran on, from bar to bar, streetcorner to streetcorner, until we found ourselves back at Milo's, exhausted, over-drunk, and an hour shy of sunrise. We made spaces on the hardwood foor and passed into dark, deep sleep. 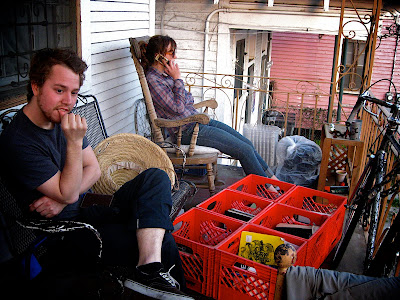 Posted by Peregrino at 9:39 PM