Heat, or Foolishness Across America, Day 11 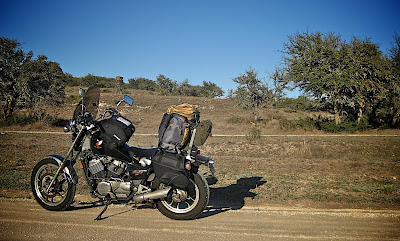 I made Austin before the second storm broke, stopping once for two gallons of 93 octane and one almond Snickers bars. Andres was sleeping when I showed up, so I relaxed awhile out front. We hadn't seen each since the Brasil trip, but the reunion was easy and natural. He'd taken up boat piloting on Lake Travis outside of the city, operating party barges for legions of drunken tourists and college kids. Open water, hot sun, and over-drunk twenty-somethings. "Yeah, a lot of people die," he said, "but I haven't had anyone get killed on one of my trips yet."

We went for BBQ at the Green Mesquite and met Maduro afterward at the B.S. Saloon for one-dollar-LoneStars. Andres' girl met us a few drinks later at the taco stand on Lamar. Tacos led to more beers which led to a soak in the hot tub. My back ached. My right hand was throbbing from 2000 miles on the throttle and the heat was miraculous.

I woke loosened and refreshed, with only a slight haze from the lateness of the night. I'd thrown off my blanket sometime in the early morning, but still woke with a thin band of sweat on my neck. The sun was pouring in though the porch window and the weathermen were calling for a high of 80 degrees. Andres and I got some cheap Vietnamese before I took off. I rode 290 west out of town, sweating under my thick jacket. The storm had cleared and Spring had arisen almost overnight. The trees and the hills took on a familiar color and shape and the sky opened blue and vast before me. Two thousand miles had passed below us: I had made it to the desert once again. 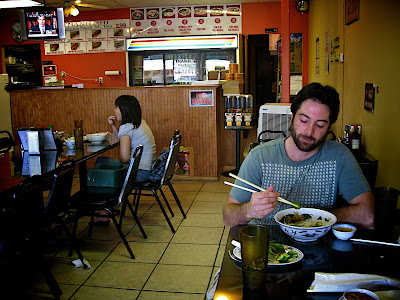