Miles Per Gallon, or, Foolishness Across America, Day 13.5 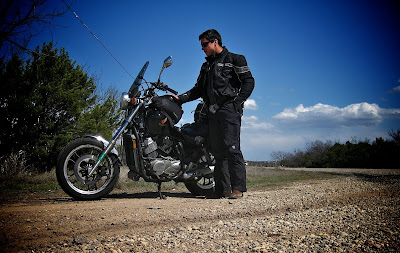 The ride began like a dream. The sun was warm, the roads twisted beautifully through the Hill Country. The grease I'd used on the shift linkage was a miracle. The bike had always strained to drop into 1st, but did so now with smooth precision. I felt light and free, finally out of my heavy winter gear. I stopped awhile in Fredericksburg, taking in the side streets of the little German town.

It didn't last. A sharp, steady headwind met me at the interstate junction. The bike struggled to move west. I ducked behind the windshield as best I could, remembering the cold first week of riding back East. Clouds grew in tall, dark stacks on the horizon. There hadn't been any rain in the forecast, and I was unprepared. I could see the strands of precipitation forming and suddenly regretted packing away my warm clothes and wet weather gear. Down drafts gusted from the storm, blasting the bike from lane to lane.

The storm was like a wall, and behind it I could see the break and the clear blue. The rain was falling, but only beginning to hit the highway. The storm and I were advancing in opposite directions. If I could make it through before it really hit, I'd be in clear sky. When storms hit in the plains, cattle tend to run away from it, and in doing so only prolong their time beneath it. Buffalo run headfirst towards the rain and thunder, braving the worst of it so as to reach the other side's clear more quickly. I thought about buffalo and opened the throttle. The rain smeared across my visor and windshield. Wind threw me and thunder roared overhead. Then, I was out, I was clear. I yelled a cheers to the bike, shook the rain from my helmet and went on into the wind.

Still, the headwind was fierce, the worst I'd encountered yet. I thought my throttle had locked up, only to realize that I had it open as far as it could go. Even with full throttle I could barely get the bike to 65mph. I downshifted and chugged up the hills, tractor trailers riding my rear. At Ozona I lost power, the bike suddenly dropping to a crawl. I threw on the reserve tank and rode slowly into the first station I could find. I could hardly believe that I'd run through the fuel so quickly, having only gone 90 miles. The bike can reach 70 miles per gallon when treated right, but the wind had thrashed me, and I'd counted on worse mileage. When I filled the tank and crunched the numbers I was in shock. The headwind had taken me down to a miserable 30mpg. Stations in West Texas are often eighty to ninety miles apart, and with a 3.2 gallon tank, I'd need to fill at every opportunity.

I stopped inside for coffee and a chat with the register girl. She said that the wind had taken the roofs from several houses in town. I lingered a bit before pressing on. The rest of the ride was hard. I made it to Balmorhea with little left in the tank. I pulled off the exit for gas and the bike died completely. I coasted to the side of the road, cursing and scanning the bike for clues. No luck starting, the engine cranked but refused to turn over. I checked electrical lines, but the lights and horn worked well enough to dispel such worries. The spark plugs were firm and clean, the lines were tight and intact. I attempted to pop the clutch, to no avail. Shoot. It was cold now, and the sun was getting very low. Cell signal was weak at best in the mountains.

I pumped some fuel in and left the reserve tank switch on. The engine sputtered a bit, giving me a flurry of hope. I waited another moment and cranked it. Ignition. Success. The bike woke up and fired. I hopped on and cruised to the filling station. A full tank of gas kept things going smoothly. It seemed to be a problem with the fuel, and I went along hoping it would last till Fort Davis. A cop cruiser tailed me awhile on 17 South, but finally gave up chase and passed on. I was hesitant to stop, thinking I may not get the bike started again. When I finally pulled into town I was exhausted and worn with the wind. Carolyn's house was warm and full of hospitality. I put down a hot meal and refreshed with a some good Mexican tequila. It had been a hard day, maybe the hardest of the trip. Thank god for friends in wild country like this, I thought as I kicked off my boots and laid in for the night.

After some analysis and a discussion with my father I decided the bike, low on fuel and running hot, had formed a vapor lock in the lines. The sudden deceleration and the decline of the exit off ramp must have thrown the remaining fuel to the front of the tank, sending only vapors into the carbuerator. The system was locked up until the bike cooled down and fed itself more liquid fuel. A bit of a scare, for sure. So far we'd come, without real troubles. I fell to sleep and hoped the trials of the day were simply that, and not an omen of things to come.
Posted by Peregrino at 2:03 AM