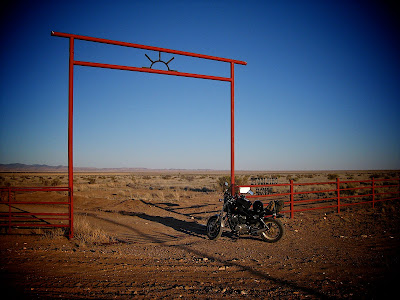 If you love something, you let it go. And you hope, and you hope hard and long, that it will return.

Back in West Texas, the place all this adventuring started five years ago. Bacon and eggs for breakfast. Kale was hurting from the tequila and stayed in bed all day. I managed to catch lunch with Albert and Carolyn in Fort Davis before heading to the ranch. The roads were twisty, empty, beautiful. It felt strange to have the bags off the bike and I found it easier to lean into turns and shoot up steep inclines. On the way to Valentine I stopped for a few photos. An old pickup pulled into the clearing behind me and OldBoy stepped out. He was without the black denim and wide-brimmed cowboy hat this time, but the grit of his voice was unmistakable. He was on his way to Ft. Davis to replace some vehicle switch for his rig. We talked awhile about the country and he told me some stories about making records with Stevie Ray Vaughn in New Orleans.

I found the old dirt track to the ranch and began the drive in. The winter rains had washed the road and the bike jolted badly against the washboard surface. It took me forty minutes, over cattle guards and water ruts, before I reached the ranch headquarters. Granny and Gramps were inside at their usual places. A bowl of freshly-shelled pecans brimmed on the table next to a pitcher of unsweetened ice tea. It was as though life had stood still in this place. I wore the same faded cowboy boots I'd bought here years ago and sat in my regular seat at the table. It was hard to be there without A, after all the time we'd spent working and learning on the ranch. There were too many memories under those old cottonwoods for me to stay the night, so I took off on the bike, back down the rough dirt track and out to the highway.

The sun was low, spreading a pale violet across the grasslands. A few pickups passed by, but mostly I was alone on the road. The engine rumbled rythmically as I retraced the route. A few Great Horned Owls bellowed at the turnoff to 116, but otherwise I was the only sound in the night. I was cold by the time I reached Fort Davis and thankful for the hot meal and the comforts of the guest house. This forgotten slice of West Texas was frozen in place and as beautiful as ever, but it was hard for me to stay. Thin ghosts of the past lingered at every fencepost, on every blade of tobosa grass. I resolved to leave early the next morning and outrun them as best I could. 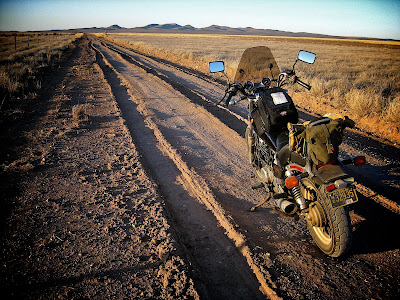 Rough roads at the Ranch 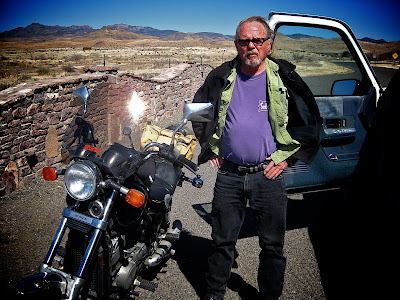