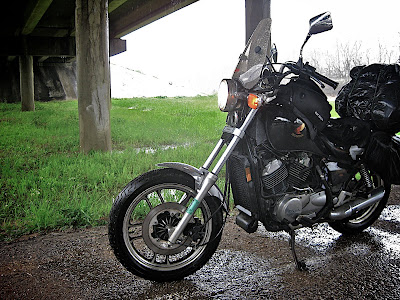 The news that comes at midnight in a Motel 6 parking lot is never good news. It was A on the other end of the phone, angry, upset. I hid under the eaves of the building, avoiding the rain as we talked. The distance and uncertainty was taking its toll and I could hear in her voice that her patience was nearly gone. It was late when the conversation ended, and I wished badly that I'd bought more than just the two beers.

I woke to roaring thunder. The sky was dark and unfriendly. Two hundred miles till Austin. I hoped it was enough time. I stopped in one of the hotels along the road for a free continental breakfast and stolen WiFi (a trick I learned from my brother after his first cross country venture). One hundred and ninety miles till Austin. It was not enough time. Fifteen miles out I was hit with a wall of rain. The drops started slowly, plink-plunking off my helmet and windshield.

Everything was suddenly draped in gray and the road disappeared ahead of me. The raindrops felt heavy against me, despite my many layers and thick helmet. I tossed my head side-to-side, trying to clear my visor, but had little luck. Trucks on all sides threw up streams of backwash and wind. Motorcycling next to tractor-trailers makes for a strange dance. The trucks first stir up the air and toss you sideways, then, as they pass, pull back sharply, sucking the bike dangerously close.

I struggled to stay in the middle of two trucks, using them to break the wind and rain. I'd wrapped my luggage in black trashbags, but had neglected to shield my tankbag. The map and directions were half-soaked, so I took the next exit and found a bridge to hide beneath. It was like being in the eye of a hurricane. A peaceful, quiet place, surrounded by torrent. I covered the tankbag and waited a few moments before climbing back on. The rain had quieted some, and I could see enough to ride.

I passed by a mangled semi, laying in the median. Police and rescue workers ran wildly about, dressed in high-viz yellow and shouting orders. A family of Mexicans stood nearby, looking back-and-forth between the semi and their own obliterated SUV. I'd had a close call the day before, nearly being eaten alive by a truck carrying a load of coffins. I appreciated the irony for a moment, then gunned the engine and sped away as fast as I could.

Posted by Peregrino at 9:32 PM