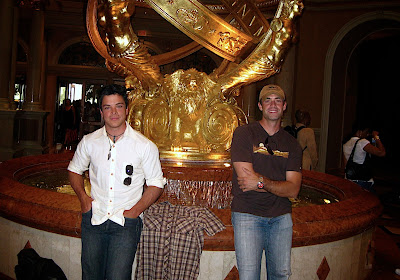 One month of preseason work had warmed us all to the desert. Now, a long weekend in Vegas, celebrating birthdays and other nonsenses. It came at the end of such a marathon run of bike travel, late nights, and bird-maniac rowdiness that it seemed near impossible to survive a weekend in that town. Pajaro and I rode at top speed into town, shouting to music and buzzing with the energy of the neon paradise.

We were settled in our room and out on the town by six. Pajaro's friend, Shrimp, was sharing the room with us. He met us in the casino, already half-drunk. Shrimp ran the Mexican Gray Wolf project in the Apache Wilderness northeast Flagstaff. He hadn't been out of the wilderness in months and the energy of his anxiousness poured from him. Pine woods to palm trees in twelve hours. It proved a bit much for him, and we chased him down the street as he ran full speed along the strip. He was red-faced and cradling a three-foot-long jack & coke when we caught up to him in front of the Bellagio. We watched the casino's world famous water show and helped him finish off the cocktail. Jesus freaks shouted into megaphones on the corner and Japanese tourists clicked cameras. Water cannons shot towers of white foaming spray, making arcs and whirls as the casino speakers pumped Sinatra.

Pajaro's crew from his days guiding in the rainforest was due in. We met with Jaytown and his crew, a cluster of twenty characters that took turns appearing and disappearing in the haze of the night. Later in the night we found ourselves tipsy and blessed with the serendipity of a stretch limo. The driver pulled us around to the Rhine Club, where we roared and reeled till 3 am.

The next day followed suit. Memories of hotel pools, pulsing nightclubs, and bewilderment. Four of us awoke Sunday morning in a seven-hundred-dollar suite at the Venetian, depleted of life and thirty minutes shy of checkout time. I felt deeply unbalanced as I waited in the valet line for the vehicle, clutching my ticket and sweating in the hot sun. The ride home was rough, but we drove fast and made Searchlight by one. I'd left the bike at home, knowing I wouldn't be in well-enough shape to ride back. It was a good decision. I met Pajaro in Searchlight at Terrible's gas station & casino. We drank vitamin waters and threw down six or seven Tums apiece in the gas station parking lot, shaking out heads at the weekend.

The rest of the crew was waiting for us at the house. A note had been scrawled on the door, "Welcome Back You Drunken Hobos!" The crew was inside, half-buzzed on Bud Light Cheladas. Shrike was sloppy and stumbling around the house, the rest were smiling and slightly red with sun. Snowflake came out shyly, bearing sweet bread she'd made for my birthday. I was exhausted and laid out on my king size bed. I put on some hazy, summertime music and stretched out. The guitars filled the space in the air and I lay watching the ceiling fan spin. It seemed the climax of the long road out here, and I was glad to have made it through.
Posted by Peregrino at 11:57 PM