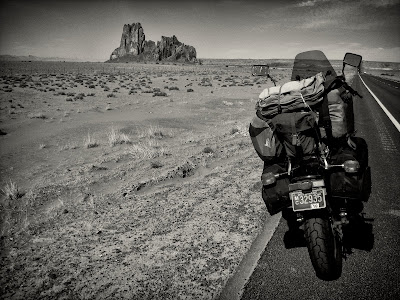 I got up early and unchained the bike from the motel stairwell. I'd be crossing the state line today, leaving Arizona after all. The promise of new states felt fresh after sleeping off the troubled feelings from the day before. There are nights like that on the road, downbeat and foul, but in the end they are necessary, better reminding you of the beautiful bits.

I went quickly into the wasteland of northeastern Arizona. Past the dip of the Great Canyon is a bizarre, barren landscape of reds and yellows. Towers of brittle rock stack upon one another like faltering bookshelves. The towns on the map are exaggerations, consisting only of battered wooden huts, tended by broken Navajos, selling beaten-up jewelry. Even these are empty half the time. One town was nothing more than an abandoned house full of old washing machines.

By afternoon I'd reached the confluence, passing the Four Corners monument as I rode into Colorado. The monument was closed. Disappointed tourist families pressed up against the chain-link fence, wondering how a state line could be out of order. Angry fathers checked and rechecked guide books while their wives and children waited, bored, on the sidelines. The desert wind had been reluctant to let me leave and I was worn out when I reached Dove Creek, CO. I'd been invited to stay with Michigan at her new field station on the Dolores River. The thought of familiar company pushed me on.

The last roads out of Dove Creek twisted wildly down into the river valley. I'd grown complacent riding the long desert highways, and these mountain curves took me by surprise. I shot awake, leaning deeply into the downhill spirals. It was satisfying test, reminding me of the narrow Pennsylvania roads where I'd learned to ride. I'd taught myself on those (often nerve-splitting) Appalachian byways. I had been a complete beginner: terrified and exhilarated each time I turned on the bike. It had always felt like facing death. I hoped the 7,000 plus miles between then and now had taught me something.

I made it into Michigan's place at dusk. She was doing some bird netting on the river, working out of a small trailer under some cottonwoods nearby. For now, she was fortunate enough to be house-sitting the owner's place, a staggering tower of a home that reached up four stories into the Colorado sky. Her roommate, Pucker, had made a wonderful apple pie. I maneuvered myself a generous portion as we sat telling stories and catching up. We climbed to the top of the tower and lay on the roof, watching falling stars and satellites. It was cold and clear. Poorwills, Great-horned Owls, and other night birds called out occasionally, reinforcing the silence. I slept soundly all night. 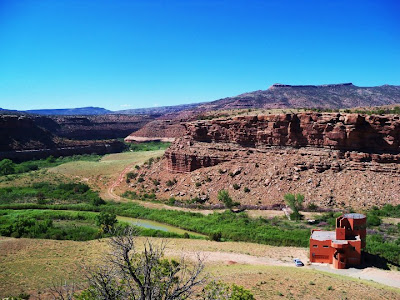 Quite a perch for rooftop stargazing photo: L. Solomon 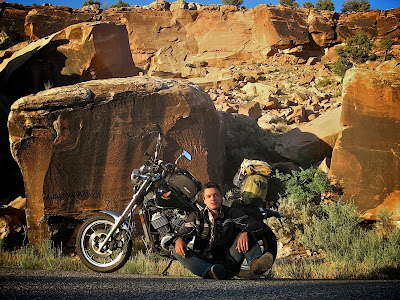 After descending into the river valley
Posted by Peregrino at 1:08 PM