Here's to you, Eisenhower 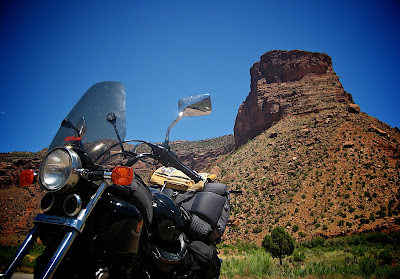 Colorado, before crossing to the Continental Divide
The air was getting thin fast. I could feel the bike sputtering under the irregular mix of air and fuel. The altitude had her running too rich, and I had to downshift to move past 60mph. Twelve miles from the Eisenhower Tunnel, that mile-and-a-half-long tube pushing I-70 through the Rocky Mountains. One ancient Honda motorbike versus the tallest highway in America. I was a bit nervous, having had altitude trouble in Flagstaff a few days back.

I cranked up the idle adjustment and pressed on in third gear. Higher and higher we climbed, past lumbering semis and a smoking station wagon. Several cars had pulled to the side of the road, engines down and hoods up. Their drivers stood in huddled confusion nearby, clasping their arms against the cold wind.

Four riders came out of the right lane and joined me in the climb. The first few were three beefy Harley dudes, the thunder of their engines preceding them by a quarter of a mile. They were dressed in standard Davidson duds: leather caps, sleeveless shirts, full-face skull bandannas and black chaps. The lead rider even dangled a thick silver wallet chain from his hip. The fourth rider zipped past the group. This one was an older man and woman riding two-up on a slick BMW sport tourer, a mini-trailer dragging behind. Their jackets and pants blended seamlessly with the bike's blue and gray paintjob.

I kicked down another gear and blasted up the last portion of road, feeling somehow heartened by the company of this motley spectrum of riders. Jaybird complained one last time before roaring up the final climb. We hit the tunnel at high-speed and disappeared under the mountain. I stood up and pressed the horn, laughing at the echo it made against the cinder-block walls. This improbable machine and I were eating up America one tiny mile at a time. 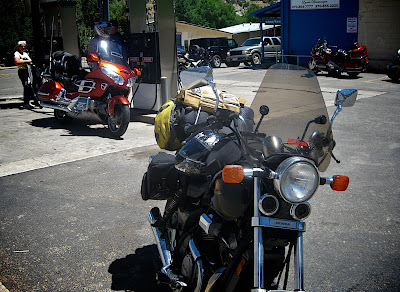 Swapping road stories with bikers in Naturita, CO
Posted by Peregrino at 1:35 PM