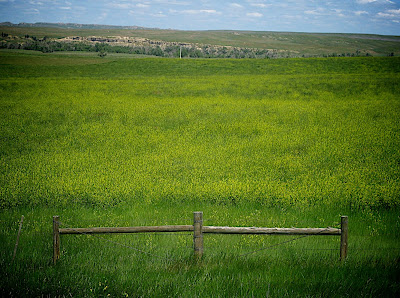 It's hard to beat a hot plate of Eggs Benedict after 200 miles of cool morning riding. I woke early in Fort Collins, CO and loaded the bike. My cousin and his wife were out of town so I was staying at my new boss's place. He was asleep with his girl when I got out of bed, so I quietly made black tea and a plate of toast.

The neighbor's wife was pulling in as I cranked the engine. I'd witnessed a terrific domestic tirade the evening before while working on the air filter (after discovering a mouse's cache of seeds and shells inside). Ten minutes of shrill shouting followed by a flustered housewife screeching away down the driveway. Troubled marriages, fresh-cut lawns, and two car garages. My reintroduction to the city and the suburb. Even the humidity in the air seemed foreign after a season southwest.

My blood had definitely thinned some in Arizona and the early morning air chilled me. I was in Wyoming by eight, and not far from Nebraska by half past. The land was rolling and yellow-green; the plots directly along the highway groomed for cattle and crop. The grass was neon where the irrigation lines met the fields.

I was so mesmerized with the new landscape and the calm of the morning that I ran four miles past my exit. It was the first time I'd missed a road since leaving Delaware. It turned out to be good fortune, as I made my recourse past the only gas station before Scottsbluff. I'd have surely run empty had I pressed on with the fuel that was left.

A lone antelope darted suddenly across the road a dozen feet in front of me. Its white rump and cinnamon flanks stood out sharply against the brilliant green farm fields. It reminded me instantly of my encounter with the white deer in Delaware. I'd been on the Hawk Watch Hill at Ashland Nature Center, watching the last movements of migration. A few birds pushed through the sprinkle of rain. Without warning, a bright albino doe leapt from the cherry tree grove, crossing my path as it went. She was no more than six or seven feet away, pure white and breath-taking. It was a startling and magnificent thing on a drab November day.

It had been just one day after making my mind up about Arizona. I'd been offered a position working in Maui as well, and the choice had gnawed terribly on me. I was relieved to have seen the white deer. In many cultures the sight of such an animal is taken as affirmation of a good decision. The white stag, in medieval cultures, was the symbol of the chase and endless adventure. Mysticism or no, it seemed fitting to see this thing before setting out on my own travel.

I took in this antelope with less intensity, simply pausing a moment to watch it run across the prairie and out of sight. I fired up the engines, turned north-northeast, and went along, humming the whole time, 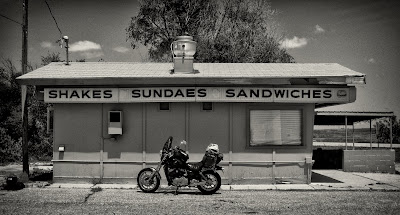