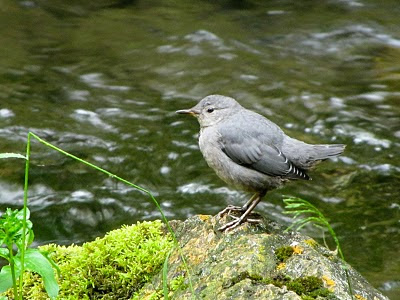 American Dipper   photo: E. Ripma
Cinclus mexicanus, AKA the water ouzel, AKA the American Dipper. I'd hunted him for so long. In the excitement of the Orange-billed Nightingale Thrush, I'd forgotten to search for the Ouzel. I planned to stop at Iron Creek one more time on the way out of Rapid City, taking the longer route out of the Black Hills. I thought it'd be a fitting goodbye if nothing else.

I returned to the creek bed, having been there only one week before for the Thrush. It had been in the papers Saturday, taking up a whole page and a half. The article had brought in over 100 people that same morning. Now I saw only two cars in the lot. Surely there had been more in the early morning, but it was growing close to noon, and too hot for much bird activity. A couple of middle-aged birders were standing at the trailhead, socks hiked, binoculars up.

I talked with them a bit, but made clear that I was in pursuit of the American Dipper. The older gentleman appointed himself as tour guide and took me up the trail. He'd seen several that morning and claimed to know the good spots. We arrived to the first spot. Beautiful running water on the rocks, sure, but no Dippers. I'd told myself that seeing an Ouzel would be a good omen for the trip. Still, I was running short on time if I wanted to make it past Casper, Wyoming. Shoot. I resigned myself to an inauspicious trip and dragged my feet back towards the bike.

A Dipper. For Sure. Had to be. I ran back and leapt over the rocks. My tour guide was waving both his arms in the air frantically.

"He's right up there on the log," he said, quietly now that I had arrived, "Got him?"

Sure as hell, I got him. The slate gray bird hopped about in the water, up and back from rock to stream. His stubby tail raised comically to heaven as he thrashed the water for insects. What a beautiful sight. I'd been looking for Dippers since I first learned that there was even such a thing.

"Keep an eye out for Dippers," Chelle had said, while working a survey in Oregon 2 years back.

"A what?" I asked, blowing my cover as a "good birder". She was my boss and we were only one week into the job. I didn't even realize she was talking about a bird of any sort, let alone one that we'd find in the water. "A bird that swims?" I was mesmerized.

I spent the rest of that season searching for the elusive Poseidon birds. I continued my hunt long after the job was over, when I was living in Portland. Still, Multnomah Falls offered no luck either. I caught sight of White-capped Dippers on several occasions while in Colombia. Thrilling, but somehow not quite the same. It swam, yes, but I was stricken with a more patriotic yearning. I wanted the Dipper of the West, the peculiar Ouzel that John Muir so lovingly portrayed in his writings.

Two years was a long time to wait, but here he was. The bird stayed put, foraging and splashing about for a good fifteen minutes. In fact, I left before it did. Wyoming was a long way off, after all, and I'd planned on seeing Devil's Tower first. I gave my heartfelt thanks to my friendly guide and took off, good luck trailing me the whole ride.
Posted by Peregrino at 9:02 PM