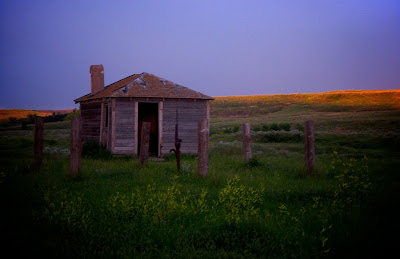 Abandoned homestead
"You should be advised that you are private property. And trespassing. As for your survey - I don't much care for it. If I see this again I will call all the authority. - Mark"

The child-like handwriting was scrawled across a damp piece of cardboard and wedged neatly under my truck's right wiper. I'd been out since five a.m. I was exhausted from the morning's 8-mile mountain trek and could only laugh. I'd arrived after dark the night before and must have turned off the forest service road at some point. I might have felt bad, if the guy didn't sound like such an asshole. Images of flannel-clad farmers shooting hawks came to mind. I thought about taking a detour through his field on the way out, but decided that he probably already suffered enough as the owner of such a lousy attitude. People like that always seem to.

I was way north, somewhere in the mountains past Reva, SD. You could just see the North Dakota border on the horizon. I didn't have too many sites this far out, and wanted to finish them up as soon as possible. I'd left Rapid City the afternoon before and gotten in late. I spent an hour four-wheeling back and forth on farmer Mark's mud-slick roads, trying to find an access point. The directions given to me were mostly useless. Some worn-out biologist from last year, done with the site and not giving a damn enough to anymore to write roper directions. I sympathized.

The sun was getting behind the mountains and the best I could do was a spot 2.5 miles from the site. I called it good and laid out for bed. Redstarts, chats, field sparrows and a whole mess of indistinct birds cried out from the streambed. It was too dark to read now (The Way of the Lakota, a fitting gift from Wheeler before leaving AZ) so I lay listening as their evening song mixed with the stars. 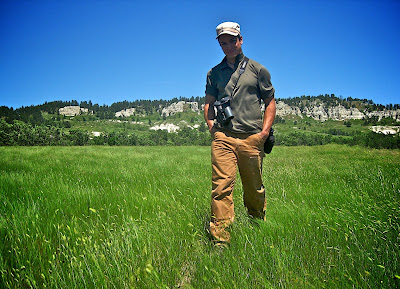 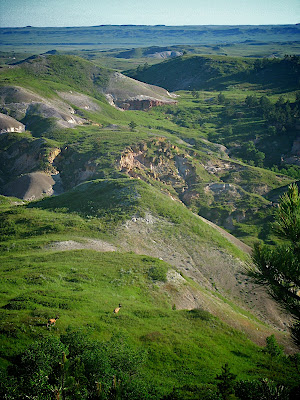 My site was at the other end
Posted by Peregrino at 7:01 PM