The few days in Ontario were peaceful and warm. We frequented the coffee shops and cafes in downtown Kingston, and walked along the waterfront at Amherstview, where Juniper grew up. We went out for Indian on our last night, savoring delicious samosas and lamb korma over perfectly prepared Basmati rice.

Early the next morning we crossed back into the States and rode together together until Watertown where we separated again. Juniper had taken a job banding the season's migrant songbirds in Kiptopeke Virginia and was due to start the following day. We shared a coffee and some gas station pastries before saying goodbye. I promised to come see her soon as I could, slipped on my gloves and rolled out onto highway twelve.

I was only two days away from home myself, and the proximity was unsettling. After so long on the road, it was strange to know that I was at the end of my trip. As with every journey, I was fearful of the end, reluctant to let it go in case it should be the last.

But for the moment my courage was mustered by the comfort of camaraderie. Porkroll and my brother, OneShirt, had decided to ride north together and meet me for the return trip home. I was excited for their company, and, after six months of riding solo, eager at the thought of having a motorbike posse by my side.

They'd come from Philadelphia the day before, and had planned to meet me at the Ommegang Brewery in Cooperstown, NY. I'd figured they'd beat me there, but I saw no other riders when I pulled up the long drive. The brewery was built on an old farming property, so there was plenty of space to stretch out. It had started to rain as soon as I'd left Juniper in Watertown, and I was cold and thoroughly soaked. I pulled under a large overhang and laid out to dry, feeling sleepy and content.

An hour passed, then two. I tried calling but got nothing. I was beginning to get the notion that something was amiss, when OneShirt messaged me:

"had a slight incident. everything ok now, see you soon."

I was of course curious and concerned but I figured they had everything under control. I soon heard the sputtering of old Hondas up the drive, and two rain-soaked riders zipped by me. The cavalry had arrived, after all. They doubled back and parked under the overhang with me.

Then I noticed Porkroll's blood-streaked pants. He'd hit a slick railroad track during the downpour and gone down. Luckily the bike wasn't too badly mangled, and the scratches on his knee looked worse than they were. Considering the severity of most motorcycle crashes, it was lucky break.


Still, the whole event had rattled both of them and, coupled with the cold rain, reason enough to take a break from the road.  We retreated into the brewery to warm up, take a tour, and (most importantly) have a beer tasting. The beer and accompanying snacks returned our good spirits and jolted our core temperatures. The sun had begun to poke out from the edges of the passing rain clouds and the road seemed a friendly place once again. We kicked our bikes to life and tore out of the lot, our caravan of bikes kicking up rocks and bits of earth as we went.

It'd was late when we neared the border, so we circled some of the small towns near the river looking for a place to stay. The Susquehanna Motor Lodge was nowhere near Susquehanna, and farther still from luxurious. But at fifty bucks for the three of us, and no other motels in sight, it was a deal. There were only two beds so I volunteered to sleep on the floor.

We indulged in some beers and a few smooth cigars (Porkroll's girl, L, had brought them from the Dominican), but even this buzz wasn't enough to distract me from the flea bombardment that kept me tossing half the night. I spent a few hours scratching and regretting my decision to take the floor, but finally fell into sleep.

We'd be riding state highway 97 tomorrow, a famous route along the Delaware-Pennsylvania Water Gap. It'd been a long ride that had brought me here, east again, and I could feel the closeness of home on the horizon. Almost 12,000 miles we'd gone, the Honda and I, and the notion of staying put for once seemed a strange thing indeed. 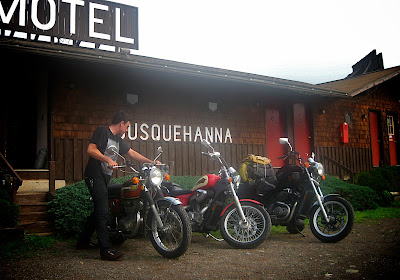 Posted by Peregrino at 7:27 AM