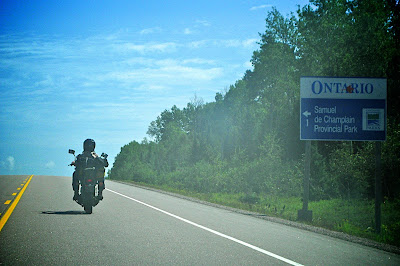 The ride had started beautifully, and with the good diversion of company, as Juniper was following close behind in her black Oldsmobile. We went north along the lake from Manistee and across the world's longest (and perhaps windiest) suspension bridge. The bridge took us into Saul St. Marie, where the resistance began.

At the Canadian border I was pulled aside and questioned repeatedly before eventually being forced inside to a small room for further interview. I was finally let through, grateful that my carefully loaded bags hadn't been unfastened from the bike and ransacked.

We left the city and went east into the thickening woods. The roads began twisting nicely and I leaned in low to work the curves. Halfway through a long, fast righthand bend I noticed a police cruiser in the oncoming lane. Speed limits in Canada are unreasonably low, and I was well past the 65k(ilometers)ph posted suggestion. I'd always wondered if radar guns worked when both vehicles were in motion in opposing directions. They do.

I saw the lights flash on and the car spin into an about-face to follow me. I pulled over, took off my helmet, and stood next to the bike. I saw Juniper drive by and park up the road, watching worriedly. I'd never been pulled over on a motorcycle before, and the feeling was very different. Most noticeably, one feels less intimidated standing face to face with an officer, rather than tucked low in the driver's seat and speaking shortly through the window. Something about the posture gives a touch of humanity and a casual air to the otherwise intimidating encounter.

I was informed that I'd been riding somewhere around 125kph, just a bit more than double the posted speed. Not untruthfully, I told my Canadian emissary that I was finding it hard to stick to the "right speed", as the kph numbers on my speedometer were barely visible over the imposingly large MPH digits. It was a pretty lame excuse for burning through backcountry turns at double speed, but some combination of luck, motorbike magic, and a sympathetic officer put me back on the road with little more than a friendly warning.

We'd planned to stay the night in Sudbury, but we quickly discovered this to be impossible. The clerk at the 3rd motel we tried told us that some youth sporting event had booked up every room in town. He was not exaggerating. We spent near two hours riding from hotel to hotel, but nothing was available. Every room from the most expensive to the most foul was booked solid. It was midnight now, and we were exhausted from over 500 miles on the road. I'd been looking forward to stopping since the sun went down, and the news was a blow to my road-weary body. I could see that Juniper was ready to stop as well, and with each "no vacancy" sign we encountered she deflated a bit more.

We had no choice but to muster and head east to the next town. I had few qualms about sleeping out in the urban jungle myself, but some vestigial chivalry inside me couldn't allow Juniper to do the same. We agreed that if we couldn't find something in North Bay, another hour and a half down the road, we'd relent and sleep at one of the day-picnic areas along the highway.

I was sure North Bay would have plenty of space, but we struck out on our first three attempts. It was looking grim, and the the hour was approaching 2am. We went further east to the edge of town and I pulled into the gravel lot of a motel with no name and got off the bike. The only room with lights on had it's door open, so I guessed it to be the office.

I walked up to the door and realized instantly that it was nothing of the sort. The room looked very lived in, though there was almost nothing in it but trash, a stereo, and a single mattress. An old woman in a tank top was lying on the mattress, empty eyes held open. She moved her glare towards me, but I was already gone.

Juniper looked at me questioningly from the car, but I just shook my head and got back on the bike. I saw another dim, half-empty motel a few hundred feet up the road. It looked disturbingly similar to the one we'd just tried, but we were getting desperate so I stopped to check it out. I told Juniper to stay in the car and keep an eye on my bike while I went in. The office was locked and dark, but I spotted some women on one of the patios of a nearby room. I waved hello and asked about rooms.

They were nearly unintelligible, and further confused me by saying that their own room wasn't even part of the motel, but rather some sort of long-term rental. They disappeared inside without explanation. I was turning to leave, when one came out with a phone in her hand.

"Who's not answering?" I asked, getting frustrated with the strangeness of the night.

Before I could answer she was off, keys in hand, to the darkened office. I was baffled as to why this woman had keys to the office, or any of the rooms for that matter. I was already convinced that it was probably a bad idea to stay at this place. While we were in the office, a young man staggered in silently, beer in hand.

He vanished wordlessly and she turned back to me.

"Look," she said, holding out a key she'd taken from the desk, "Yo'wanna stay 'n this room, that's cool."

"You jus' leave before 6am when Len gets here, an' you don't gotta pay nothing'" she answered.

The thought of a free room was enticing, but weighing against it was every other red flag waving in my face. I looked at Juniper through the window and decided I didn't want to risk anything.

"Thanks, but I think I gotta check some other places first," I lied. "Maybe I'll come back after that."

She scoffed, and walked slowly back to the porch to resume the drinking I'd interrupted when I'd come.